7 Reasons You Don’t Believe In Prayer 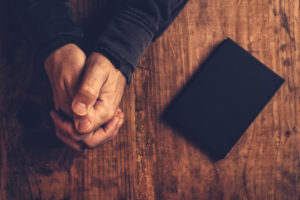 Put off by the title? Don’t be. My goal isn’t to judge you. My goal is to wake you.

Nor is my purpose to cause you to throw your hands up and say, “Why pray!”

That would be a fool’s errand. Complete idiocy.

Rather, my aim is to start unraveling the greatest plague of the American church. A famine of sorts. Prayer starvation. Prayer disbelief.

It’s possible to do all those things and still experience a profound deadness of soul.

What follows is my devil’s advocate approach to our greatest spiritual problem. My hope is that we’ll stop, think and then ask God to help us do something about it.

How did I come up with these seven? It wasn’t hard. I just looked into my own heart and wrote down all the things I didn’t like.

Anyway, here they are.

You Believe In Your Mind

But that’s as far as it goes.

It just never trickled down into your heart.

There’s one quick way to find out if you believe in prayer.

If you pray. You do.

On my writing journey, I’ve found that there’s one kind of “writer” that baffles professional writers.

There’s just one catch, though. He doesn’t write.

In the same way, you go to prayer services, prayer breakfasts, prayer luncheons and prayer dinners.

You read books on prayer. Memorize and quote Bible verses on prayer. Admire famous sayings about prayer. Go to conferences to better your prayer life. You have prayers and pictures of people praying in frames on your walls.

You ask people to pray for you and your friends. You tell people you’ll pray for them. But you secretly realize you probably won’t.

When someone asks you to pray in church you do, but it’s awkward because you don’t do it in private.

If you were to see Jesus, you’d probably ask him the same thing the disciples did. You’d ask him how to pray. Or better yet, you’d ask if you could watch Him pray.

“Jesus, can you just act like I’m not here and just keep doing what you’re doing?”

A lot more is caught than taught as the saying goes. Prayer is no different.

You’re looking for more than prayer uttered in public once a week.

You need to learn from the example of someone who wrestles in prayer daily.

You need the confidence of someone who’s doing it. Someone who will never go back to the crummy life they had before they started praying. You need courage from someone like that to consistently do it yourself.

Past experiences didn’t pan out so well. You prayed for someone to get better, perhaps. And they died.

There are certain reoccurring problems that you used to ask for help about. It just felt too much like praying to a wall so you stopped.

Your problems didn’t get better when you prayed. In some cases, they actually got worse.

You sometimes feel about God like Israel’s King Ahab did about a certain prophet. You say in your heart, “Didn’t I tell you he never prophesies anything but trouble for me.”

Could it be that God hasn’t been giving you the answers you want, not because He’s indifferent, unable or void of compassion?

What if He has far bigger plans for your life than you do? And He knows that if He answered your every request and gave you all you think you need, you’d never get there?

No. It’s more than possible.

God always has bigger plans for us than we do though we’re tempted to believe it’s the other way around.

God help us pray through our disappointment and despair!

You don’t pray like John the Baptist or the Apostle Paul so you figure, why bother? You’re not spending hours in prayer like saints of yesteryear who became famous because of their prayer exploits.

You’re all or nothing in your prayer life. You fail at going all in so you don’t do anything.

You guilt yourself so much on your form, tendency towards selfish requests and small intervals that you quit before you even start.

Good Enough Without It

You’d never admit it quite like that. It wouldn’t be proper.

But there’s something that you can’t help noticing. You’re doing fine at climbing the spiritual ladder on your own.

Your religious community respects you. Why wouldn’t they? You have everything you’re supposed to have for that to happen.

You have a nice house. A nice career. A nice bank account. A nice reputation. Nice spouse. Nice kids. A nice dog. Nice smile. People will say nice things at your funeral without having to lie.

There’s just one catch. You rarely if ever pray. It nags you sometimes.

But hey, you’re a leader in your church, highly involved or, at least, an active attender. No one seems to care that you’re missing that something.

You know—Prayer. The most essential catalyst and indicator of true Christians for millennia now.

Pragmatism has a strong grip on you. The belief that if something works, the means justifies the end.

But, in your soul, God whispers something different.

He waits for you to admit that you’re not good enough without Him. He knows until that happens, you won’t bow the knee even though other people think you do.

You have good intentions.

But the world grabs you like a rabid dog before the sun’s up and doesn’t let go until sundown.

Your head hits the pillow and you’re asleep until the same rabid dog grabs you before it’s light again. The cycle continues like that for days, weeks, months and years.

Sometimes you think of an old saying:

“If the devil can’t make you bad, he’ll make you busy.”

You know that little quote is true because you don’t like what’s happening in your heart.

You tell yourself that someday you’ll start praying.

What troubles you is that you find time for everything else. Deep down, you know that prayer isn’t important to you. If it was, it would happen despite your busy schedule.

You think of the famous German reformer, Luther. You think about how he said he was too busy not to pray.

You admire that kind of attitude. You wish that was you. But it’s not.

If you’ve read any of my previous blog posts, you’re probably not surprised I said this. You may even be thinking that’s Neal being Neal again.

For the record, I’m not anti-American. I’ve just come to realize that American attitudes don’t always equal Christian ones.

But let’s face something.

Our self-sufficient, pull-yourself-up-by-the-bootstraps ideals have done something to us and it’s not all good.

Our inability to receive charity because it would prove our weakness. Our boasting that we need no one actually means that we could never become a Christian. At least not without heart change.

The ability to have a right relationship with God is the most massive charity or–pardon the word–assistance project ever conceived.

Trust me, the free gift God offers is something that no one wants to miss. It’s completely humbling to receive it.

But it must be done. It’s a matter of life and death.

Proud, self-sufficient American values and prayer mix like oil and water. Don’t even bother trying to stir them together.

You can only pick one. And deciding on which one you pick will determine whether or not you pray.

Where Do I Go From Here?

Give up and go home? Nope. That’s not even an option.

We’re going to crack through the heavens one minute of prayer at a time. That’s what we’re gonna do.

Could you identify with one or all of these reasons we don’t believe in prayer? Instead of losing hope, go to God and admit them to Him.

Do it right now. It’ll only take three seconds.

After that, agree with God that He has something ridiculously better for you.

Ask Him to do in you what you’ve already proven you can’t do on your own.

Is there one that you’d add to this list that I didn’t mention?

Have you experienced a recent breakthrough in your prayer life?

As always, your thoughts are welcomed and valued!