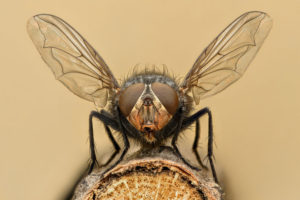 The whisperings of our potential ring throughout nature in the most unlikely of places.

I walk my trashcan back after pick-up. Sure wish that emptied can smelled better than it does.

Even though the better part of me doesn’t want to look inside, I can’t help it.

Yep—crawling with maggots. A not-so-pleasant symptom of high summer, I suppose.

Just rancid, slime in the bottom of the can and oodles of crawling critters. A whole world within a world.

Yes, it’s disgusting, I know. You probably wish I hadn’t shared the gooey details with you. I don’t blame you one bit for thinking that.

The World Inside that Trashcan

That’s what I get to thinking about. To those disgusting, reeking maggots, the top of that can is the end of their world. The cracks in the lid provide constellations for them.

So, what’s a maggot to do with all that time to burn?

Guess you get comfortable. You carve out a life for yourself in that world the best you can (no pun intended).

With all the competition, you’d better mark off what’s yours and tell everyone to keep their maggoty rears away.

Yeah, it’s less than ideal but it’s all there is. And it really isn’t that bad once you’re steeped in it for a while. You begin to not even notice the stench.

But What If There’s More?

That’s what a few maggots ask at times.

Most are too busy wading through the endless slime—Too preoccupied with their own comfort, troubles and achievements.

Maggots can be fiercely competitive, you know.

Most figure life’s just about gathering up the most glop. So, they spend their time heaping up glop upon goo and goo upon glop.

There are supposed “winners” and “losers” in this glop game. Some amass mega piles of goo but for others, the goo’s gone.

However, one day shortly after the goo games begin, they come to a screeching halt.

The maggots die. Even the ones who acted like they wouldn’t.

The goo survives another day to be hoarded by future larvae. Ones who’ll live out their lives, oh so predictably, just as their ancestors did.

The goo games begin anew but there are new wrinkles to the worms playing the game.

The “modern” worms peer up at the same trashcan-lid constellations once again.

And then they say goodbye, too.

The Game is Lame

A few come to hate those goo-gathering games.

Hard to believe but true.

They fully see through the smoke and know that eventually, the show’s over.

That’s what they ask. Others frantically try to pull them back to those dreaded goo games—A game where everyone who plays loses in the end.

Some listen to their frantic antics and some don’t.

And that’s where the real struggle begins for those who say, “no.”

“Fools,” say the slime snatchers to the slime loathers.

“You don’t see what I see?” Ask the slime loathers.

“Guess not,” say the slime loathers.

You have to say goodbye to the slime before you can use your wings. Few ever learn that in time.

Thankfully, there are always some stray misfits.

The slog to the top of that can with those heavy wings is a real bear.

“You’re a bunch of losers! All the time you wasted climbing could’ve been used for gathering slime!” Yell the slime snatchers.

The criticism makes it harder but the slime loathers refuse to give up.

And then, one day, it happens. The lid to that can opens. Blinding light floods over that sorry excuse for a life.

The few that are ready fly off.

“There’s more to life! I knew it! I knew it,” shout the slime loathers over their chorus of beating wings.

Fresh air is everywhere. Fresher than anything previously imaginable.

Flight lessons not included. They instinctively know how.

They were made for this day.

Over rivers and meadows and through forests, they speed.

Onward and upward, they buzz.

And no one can still their beating wings.

Where This Analogy Breaks Down Very Badly—Thank God

Ok. So, you’ve probably figured by now that we’re the “maggots” faced with a choice.

The decision to either cling to the filth of this world (our “trashcan”) or to fly (Heaven with God).

Yes, I own a trashcan. But I’m certainly not the Trashcan Owner (aka, the Owner of this world).

I don’t particularly like flies. They’re extremely gross. Especially when they land on my food.

God, on the other hand, loves “flies.” (People)

He can’t get enough of them.

And, because of Jesus, there’s not a fly swatter in sight. Nor will there ever be.

I had a tough time killing flies in my home for a little while after writing this! For like two minutes, anyway. ?

“Don’t love the world’s ways. Don’t love the world’s goods. Love of the world squeezes out love for the Father. Practically everything that goes on in the world—wanting your own way, wanting everything for yourself, wanting to appear important—has nothing to do with the Father. It just isolates you from him. The world and all its wanting, wanting, wanting is on the way out—but whoever does what God wants is set for eternity.”