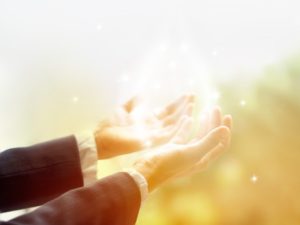 My seven-year-old daughter’s curiosity for bugs borders on obsession.

Today, she found a dead caterpillar in our garage that came to life in our mild winter and promptly died. She located its lifeless body and held it in her hand, curiosity brimming.

Next, she burst through the door crying. Five quills from the caterpillar were sticking in the end of her finger. My wife patiently pulled them out. They’d “stung” her through her knitted glove.

“Why were you picking up dead caterpillars?” My wife said to Grace Anne.

“Good question,” I thought after getting over the surprise of what happened to her.

We Have More Sense

But Someone smiles with mingled mirth and sadness.

Mirth because we think we know better but are mistaken.

Sadness because His children constantly pick up dead caterpillars. And we’re not the only ones who feel each sting.

Caterpillars of gossip, angry words, hypocrisy, laziness, lust, pride and worry sting us. We never should’ve picked them up but we did.

Imperfect parents grieve for their children over the decisions that injure and slowly dismantle them.

What must that feel like to a perfect Dad?

We read that we can grieve his heart but comprehending that fact is difficult.

“Surely, the Galaxy Maker has a heart of stone. How could my missteps move Him?”

But we’re mistaken. Ours are the hearts of stone.

His heart is perpetual Spring. And many are the flowers of his heart that we crush under our feet through sin.

Our Dad is so patient!

I’m too easily exasperated with my seven children. One crying child can quickly sap the energy out of this old, tired dad.

God’s children burst through the doors of Heaven sobbing and in severe pain, hands full of caterpillar quills.

Does He throw his hands up in exasperation?

“That’s your problem. There are too many of you and you mess up way too much,” God said never.

He carefully picks out each quill, tears in his eyes. And, at last, He is done.

“Don’t pick up dead caterpillars,” He says. His words cleanse our souls, stinging and healing at the same time.

There are many millions more to tend to. He tends to them all at once.

No. Not cafeteria style. Not like a long trough of straw.

We are so limited that we can think of nothing else.

He tends to us all at the same time. And each encounter is individual. He forces his eyes into ours as we try to hide from his loving glance.

A Father who ever reminds us that it’s always better to never pick up dead caterpillars in the first place. A Father who is ever there for us when we ignore his voice and pick them up anyway.

Such is the ongoing, tireless work of our Failure Healer.

But if we confess our sins to him, he is faithful and just to forgive us our sins and to cleanse us from all wickedness.