The Path You Must Take 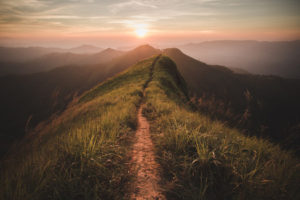 The Same and Different

A man lies in a hospital bed dying of cancer, his emaciated body filled with suffering. He is ghastly.

Another man struts through a nearby office building in the prime of life, wealthy and in need of nothing. He is handsome.

Could there be a greater divide? Is there any similarity between these men besides the fact that both have two eyes?

In unison, all humanity says, “I think not.”

But somewhere there is One who would beg to differ.

“They will both either live forever or die forever but they cannot do both. They are much the same in that way.” says a Voice.

Much the same but unmistakably different.

The one man has nothing. The other everything and not as you may suppose, either.

The Man With Nothing

The man with the best clothes, health, enviable affluence, big house and shiny, new vehicle is the one with nothing. Nothing that matters, anyway.

Things that make a life good are not bad by themselves. It’s important to mention that fact. Wealth by itself doesn’t equal vice.

It’s the conclusions often drawn because of wealth that can destroy. I say often because there are always exceptions to the rule.

Unfortunately, this man is not the exception. He’s the rule.

His outward success does something to him. He decides that since many are impressed with him and envy him in turns that he has something enduring. He feels very good about himself.

There’s just one problem. Everything he bases his worth on has nothing to do with who he really is. Those “blessings” serve only to cloud his reality.

And who is he in reality? A destitute, hopeless man.

If you were to ask him if he is a destitute, hopeless man, he would laugh at you. And there lies the irony.

What is this man like at the end of his life? This man with everything except the one thing that matters?

He is like a man who contentedly sits on the bank of a river to fish. He’s dressed like someone who knows what he’s doing. He is respected as an excellent fisherman by others.

He opens his tackle box and smiles at all the shiny lures and equipment at his disposal. He looks around at other less fortunate souls and is glad not to be them. And then it comes time to fish.

Something startles him out of his self-approval like a jolt of electricity. He frantically fumbles around on the bank in search of something he needs. But he can’t find it.

The man has come to the river, admired all that he had but brought no fishing pole!

And in this way, the man comes up to the end of his life completely unprepared. He boasted in his heart about what he owned and did. And he had it all.

But all the while, a minute from eternity, he realizes something with shock and utter disbelief. None of the things he thought mattered actually do.

He’s seconds away from leaving it all and he is missing the only One who can help him—God. And now, it’s too late.

For years, this man lived with outward success but was always one slip away from disaster. One heartbeat away from eternity.

An eternity that, when he died, he was not ready to meet.

One heartbeat away from perpetual darkness and terror.

It is the absence of God. That is all. And that is unbearable.

The absence of God means a complete vacuum of good. No sunshine, no food, no recognition, no relationships, no learning, no purpose, no name, no meaning.

All before, this man thought that he was the creator of the good he clutched in his hand. He boasted about it. He looked down on others for not having it. Looked at them like one looks at a leper.

The God he considered a joke his entire life. He surrounded himself with that Benefactor’s gifts, greedily heaping them upon himself.

He will never be a self-made man again as he prided himself in. In fact, self-made men are a mirage.

They boast about the gifts God gave them like they created those gifts out of nothing. But when they enter eternity without anything good, they can do nothing.

How do you self-make yourself when there is no good to build with in the first place? You don’t. You can’t.

This man looks at someone far off in the darkness and asks, “Dear God, who is that awful creature? That wretch?” And finds to his horror, that pathetic, ghastly being is himself.

As the great Christian thinker, C.S. Lewis, said on this matter:

“There are only two kinds of people in the end: those who say to God, “Thy will be done,” and those to whom God says, in the end, “Thy will be done.” All that are in Hell, choose it. Without that self-choice there could be no Hell. No soul that seriously and constantly desires joy will ever miss it. Those who seek find. Those who knock it is opened.”

But that’s enough of that matter. You understand the rest and must trust in a better way. And that better way is only through the death of Jesus to cover your sin debt.

So let’s go back to the dying man in the hospital bed.

The Man With Everything

That grotesque, contorted man in the hospital bed–he has everything. He can hardly be looked upon by those on earth but all of Heaven cannot take their eyes off him. He’s glorious in the sight of another world.

The frail man’s ecstatic fingers tremble, rustling at the curtains of that land to come. The Real World is close enough to kiss.

All the earth looks on that man in somber pity. They thank God, the stars or themselves that they are not so ugly. Not so close to death. Not so unfortunate.

And that man—that dreadful man—looks upon the earth and thanks God that he is not so unfortunate to dwell there more than a minute longer. Thanks God that he’s priceless in His eyes. What else matters?

He has read that Psalm of Asaph and taken it to heart.

“My health may fail, and my spirit may grow weak,
but God remains the strength of my heart;
he is mine forever.”

He’s seconds away from being able to tell that ancient psalmist how much he likes what he wrote. How much hope it gave him in a dark time. Because that psalmist is more alive than anyone living on our grey earth.

That man will soon meet God. Not God with all the dreadful accoutrements religion has assigned to Him. The real, living, embarrassingly generous God.

The embodiment of love.

A love void of extra preservatives, bizarre ingredients and fillers. That kind of love is a mere Frankenstein creation of humanity.

No. And again, thank God. Instead, it’s a love that knows this nearly alive man’s darkest secrets and loves Him anyway. And will love him like that forever.

And so it is for everyone. There’s a narrow, difficult road rarely traveled that leads through perilous terrain. And there’s a highway brimming with journeyers and all the comforts and pleasures you could want.

You must pick the perilous road. There is no other way.