Why Your Five Minutes Matter 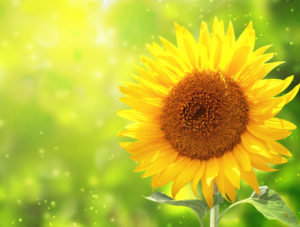 Five minutes can do a lot more than you give it credit for. Think of that five minutes as a seed rather than a pointless pursuit.

Put that dead and seemingly useless seed in the ground even though your inner voice whispers, “why bother?”

Beautiful things come from dead-looking seeds all the time.

Last year, I planted pallid, shriveled sunflower seeds in my garden. Those seeds sat in a musty paper bag for four years. “It’s worth a try,” I thought.

Months later, the seeds turned into 12-foot-tall giant sunflowers. Some of the heads of the flowers became larger around than a dinner plate.

The flowers humbly bowed their heads in the fall as thousands of seeds matured. And when the time was right, a group of blue jays had a feast.

Was it a pointless endeavor to plant those seeds? Not to our family. Not to the blue jays.

As the chilly fall weather approached, those birds had full bellies. God took care of those birds through my decision to plant. He gave them a banquet for weeks because of my haphazard afterthought. And at no extra cost to myself, I might add.

How long did it take to plant those seeds? A few minutes.

What else would I have done during that time anyway? Flossed my teeth? Swept the floor of my garage? Organized my desk?

Are you prayerless, overweight or consistently negative? Or maybe you keep failing at other goals that are important to you and God.

Give God your seemingly useless five minutes and then watch what He does with it. That five minutes can grow over time. It can transform an unspiritual person into a prayer warrior. A couch potato into a marathon runner. A toxic, pessimistic person into an encourager.

When Five Minutes Was All I Could Do

For years, I secretly looked down on devotional books. The brief Bible verse and pertaining story seemed so small that it wasn’t worth it. “Just dig into the Bible and find something more solid,” I thought.

Then I went through a time when much of my life fell apart. Guess what I started doing? Reading those small devotionals I’d looked down on. Max Lucado and others became my best friends.

For a time, my life was so difficult that I didn’t have the physical, mental or spiritual energy for anything more. Reading the devotionals was nearly nothing but it was all I could do.

Still, it was better than nothing. Far better, in fact.

Ironically, I now write short devotionals (the very things I didn’t feel were worthwhile). I know better now. There is often great power in five minutes.

A Cup Of Cold Water

When I was in Papua New Guinea, a missionary pilot I stayed with had an impact on me without knowing it.

Every time he handed out a glass of water to someone he said, “In Jesus’ Name.” He said it so sincerely with a peaceful smile on his face that you knew he meant it.

He understood something most of us miss. God rewards the smallest things that we do for Him.

How long did it take for Steve to fill a cup of cold water and hand it to someone? Hardly a minute.

In the end, God will reward Steve, you and me for minutes wisely used that easily could have been squandered. Does that sound too good to be true?

If it does, that’s just because we’ve lost touch with how kind God is.

After all, Jesus said, “…if you give even a cup of cold water to one of the least of my followers, you will surely be rewarded.”

God highly values small tasks done in faith. If we start valuing them too, we’ll feel a lot less reason to give up and begin to reach goals we’ve given up on for years.

You don’t need to listen to the lie of too little and convince yourself those five minutes don’t matter. Listen to what God says instead.

The next step is this: Don’t be surprised when God begins to multiply your efforts.