Here’s a story I wrote for a Faithwriters.com writing contest about eight years ago. The topic for that week was “In-laws.” I was seriously wondering what to do with that one 🙂 This is what I came up with.

A small drop of water, the first of its kind, plummeted into a slow moving section of the river bend. If you had been very close, you would have heard the barely audible ‘plunk’ as the tiny drop met with an infinitely larger mass of water. A small ripple worked its way out from the point of impact but was cut short by a sudden shift in the current. 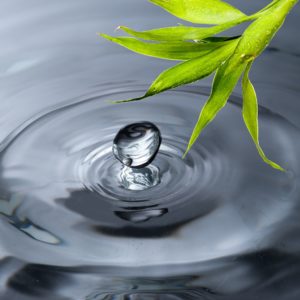 If anyone of this time had witnessed the sight, another explanation other than what had actually happened would have instinctively come to mind. Though no man or woman was there, Someone was–the Someone who gave that small raindrop permission. He alone saw it. His heart wept because He knew what soon must come.

The darkness of the previous night weakened and yielded to the first rumors of a new day. Except for a few hunters eager to get an early start on their task, nearly all others were asleep. The men, women, and children shared rooms together; and many an infant was nestled at their mother’s side. The fire in a hut near the river was reduced to a few gasping embers that emitted a thin, pale stream of smoke.

The previous night, a jovial and laughter-filled evening by the fire, had turned into a time of ‘remember when’ stories. The main course of laughter, however, as it had been for over one-hundred years now, was brought up more involuntarily and out of habit than as result of a conscious decision. It involved the local nutcase and his ‘ark’, whatever that was. The high-pitched laughter from the oldest to the youngest resounded with ‘Noah’, and many unaffectionate nicknames. They were only a few hard hours’ walk from the actual building site. On days when there was not much to do, some exertion was well worth the comedic relief the spectacle offered them.

Although it had not been mentioned that night, a very well known detail of this village was of a family there that had disowned their daughter years earlier. Her name was Sundii and when her family found out about her interest in one of Noah’s sons they were furious.

Her parents told her, “Marry anyone you wish, but don’t stoop so low as to marry from among the town idiot’s sons!” Sundii was a beautiful, kind, and gentle woman and had not gone unnoticed by the men of the surrounding towns. She loved her family. Despite this, she knew that the time would come, if things continued as they had, and they likely would, that she would have to make a choice.

Sundii held up better than most could have to the hurtful and biting comments that she received day in and day out from her family and friends. She grew to love Noah’s son Shem, and first met him when she and many others from her village traveled the short distance to have a little fun at Noah’s expense. Somehow, she knew that Noah and his family were not fools despite the fact that all of her family, friends, and acquaintances said otherwise.

The time soon did come when Sundii had to make the choice between her family and Shem. Already, she had lost the friends she had known since childhood. As they say, “Blood is thicker than water”; but even Sundii’s ‘blood’ was wearing thin. When the time for the final choice came, she married Shem. As a result, Sundii was disowned and abandoned by the family she had known all her life.

In place of it, she gained a husband and family that loved her for who she was and readily accepted her. Sundii found much support from the wives of Shem’s two other brothers and these wives found much support from her as well. All three of them had the same story to tell. They were all rejected by family and friends when their intentions were found out.

The day Sundii and her new found family entered the ark was the same day that the first drop of rain fell. Sundii wept for her former family and friends that she would never see again. In a broken voice, she quietly prayed, “God, though I don’t  understand, I trust You.” 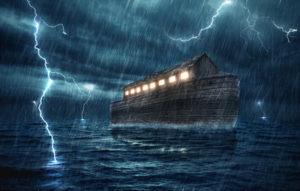 (Ideas for this story were taken from the book of Genesis, chapters six through eight. Although much of the story is speculation, a genuine attempt was made to be accurate on matters that the Bible clearly comments on.)