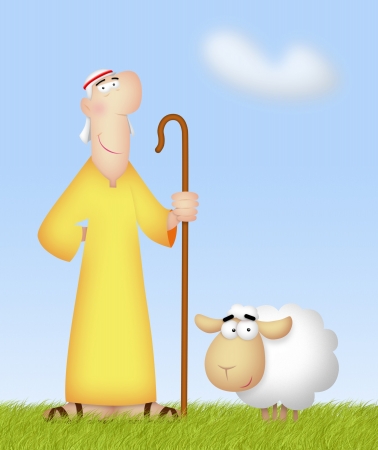 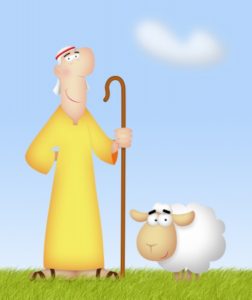 It feels weird to admit this. Childish even.

For years, I believed in a shepherd myth.

I thought of shepherds as weak. There’s ample evidence to the contrary but I found it easy to forget.

When I heard, “The Lord is my shepherd…,” from the 23rd Psalm, I pictured a skinny, 6-foot, 3-inch, pale, European, long-haired Jesus. He was tip-toeing through tall grass in a white flowing gown with a shepherd’s crook like Little Bo-Peep’s.

There was a calm river next to the sheep and shepherd. Good thing that the scene was serene, too. How would a flimsy shepherd hold up to anything else?

It’s funny the things we let into our brains without inspecting them carefully.

It wasn’t until I was older that I was confronted with the truth in a new way. After all, you can know the truth but not really know it.

What I found surprised me but it shouldn’t have. What did I finally learn?

Shepherds are tough dudes. You don’t want to mess with shepherds. If you do, you’ll get your rear handed to you.

Now, I don’t want to mislead you on something. Shepherds are tender hearted toward their sheep. That’s where I think we tend to err, though. We stop at the gentle part.

But sometimes sheep don’t listen. And often there are wild animals lurking that would love a lamb-chop dinner.

King David wrote one of the most well-known sections of the Bible when he penned number 23.

There’s safety and danger in the 23rd Psalm that virtually everyone has heard of.

But one thing remains. There are always new discoveries waiting to be unearthed even in places that are heavily dug.

I think a lot can be cleared up by taking a good look at David. He was a shepherd and he was full of courage.

As a shepherd too young to fight in Israel’s army, he made up his mind to kill the giant, Goliath, that all of Israel was too terrified to confront.

The king at that time had misgivings about David fighting this hulking man. But here’s how David replied:

“I have been taking care of my father’s sheep and goats,” he said. “When a lion or a bear comes to steal a lamb from the flock, I go after it with a club and rescue the lamb from its mouth. If the animal turns on me, I catch it by the jaw and club it to death. I have done this to both lions and bears, and I’ll do it to this pagan Philistine, too, for he has defied the armies of the living God!”

David went on to be a fearsome king-warrior for the nation of Israel. But as formidable as David was, he still said, “The Lord is my shepherd.”

David was a man constantly plagued by fears and troubles. It seems there was always someone trying to kill him.

He experienced fear of death, feelings of abandonment and despair. With all David’s toughness, he was still a weak, afraid sheep at heart.

And although you and me would feel comfortable walking with David through the untamed wilderness, he knew the truth.

There was only one true Shepherd—God. With the strength of that One, he would be ok. There was no one else strong enough to deliver him from peril.

My favorite quote about the toughness of shepherds comes from The Giant Cities of Bashan (1867). Here’s how J.L. Porter described the shepherds he saw firsthand at that time:

“The shepherds themselves had none of that peaceful and placid aspect which is generally associated with pastoral life and habits. They looked more like warriors marching to the battlefield—a long gun slung from the shoulder, a dagger and heavy pistols in the belt, a light battle-axe or ironheaded club in the hand. Such were the equipments; and their fierce flashing eyes and scowling countenances showed but too plainly that they were prepared to use their weapons at any moment.”

You would feel safe with someone like that. Me too. This is the image of a pastor who is a shepherd. Both fierce and gentle. The perfect example is Jesus.

Don’t let our culture neuter your Jesus. Or your pastor, for that matter.

Yes, Jesus leads his children to serenity. But he also takes them through the storm.

The dark forces are all around us. Demons could easily devour us. They sneer, they scoff, they growl when they catch sight of us, all alone.

They’re about to sink their serrated teeth into our flesh. That is until those powerful, evil beings notice that we’re not alone after all. Not even close.

They are no match for the power in the Shepherd’s arms, chest and legs. He gives them a glare that implies, “Don’t even think about it!”

They run away screeching, whining and limping like a dog stepped on by a draft horse.

We aren’t capable of handling scenarios like that. Our Shepherd is completely capable.

Jesus leaves those ghoulish scenes with all his sheep still at his side. Not one of them is lost.  Not one.

Unlike human shepherds, He doesn’t have the slightest fear and He’s fully armed. Every time we stray from Him, that good Shepherd brings us back.

We have no idea what’s lurking out there. But He does. And that’s why Jesus goes after us. He loves us too much to stand idly by and watch us perish.

Here’s the 23rd Psalm. Read and enjoy it. There’s not a tinge of weakness in that Shepherd. And He’s armed to the teeth.

A psalm of David.
1 The Lord is my shepherd;
I have all that I need.
2 He lets me rest in green meadows;
he leads me beside peaceful streams.
3     He renews my strength.
He guides me along right paths,
bringing honor to his name.
4 Even when I walk
through the darkest valley,
I will not be afraid,
for you are close beside me.
Your rod and your staff
protect and comfort me.
5 You prepare a feast for me
in the presence of my enemies.
You honor me by anointing my head with oil.
My cup overflows with blessings.
6 Surely your goodness and unfailing love will pursue me
all the days of my life,
and I will live in the house of the Lord
forever.